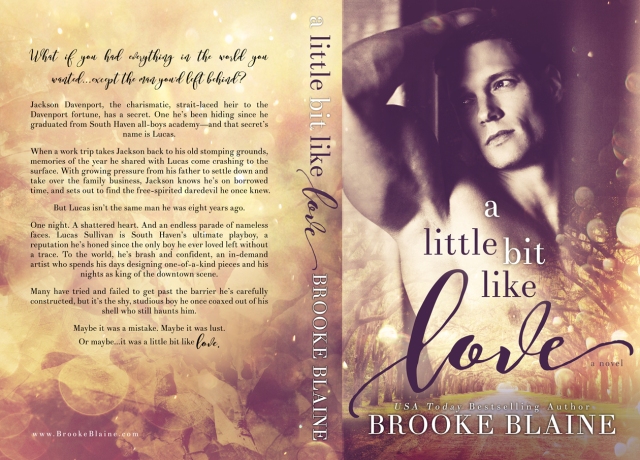 What if you had everything in the world you wanted…except the man you’d left behind?

Jackson Davenport, the charismatic, strait-laced heir to the Davenport fortune, has a secret. One he’s been hiding since he graduated from South Haven all-boys academy—and that secret’s name is Lucas.

When a work trip takes Jackson back to his old stomping grounds, memories of the year he shared with Lucas come crashing to the surface. With growing pressure from his father to settle down and take over the family business, Jackson knows he’s on borrowed time, and sets out to find the free-spirited daredevil he once knew.

But Lucas isn’t the same man he was eight years ago.

One night. A shattered heart. And an endless parade of nameless faces. Lucas Sullivan is South Haven’s ultimate playboy, a reputation he’s honed since the only boy he ever loved left without a trace. To the world, he’s brash and confident, an in-demand artist who spends his days designing one-of-a-kind pieces and his nights as king of the downtown scene.

Many have tried and failed to get past the barrier he’s carefully constructed, but it’s the shy, studious boy he once coaxed out of his shell who still haunts him.

You could say Brooke Blaine was a book-a-holic from the time she knew how to read; she used to tell her mother that curling up with one at 4 a.m. before elementary school was her ‘quiet time.’ Not much has changed except for the espresso I.V. pump she now carries around and the size of her onesie pajamas. She is the author of Flash Point, a romantic suspense standalone, as well as the co-author of the erotic series, A Desperate Man, with Ella Frank. The latter has scarred her conservative southern family for life, bless their hearts. Licked, a romantic comedy, will be released November 11th, 2015 and is the first in the L.A. Liaisons series. If you’d like to get in touch with her, she’s easy to find – just keep an ear out for the Rick Astley ringtone that’s dominated her cell phone for ten years.

Jackson Davenport had burrowed his way into my soul a long time ago,
and damn if he hadn’t ever let go.

On a business trip for his dad’s company he overhears a conversation in a diner between two men that has Jackson’s heart in his throat. Lucas Sullivan, the one that got away, can be found at a night club, that evening. As a combination of terror and hope fills him he contemplates seeing the love he left behind again. For eight years he has been squashing his lingering feelings him. Right there, in this diner in a place so close to where he last saw Lucas, they all come rushing back to the surface.

Argos is Lucas’ hunting ground. He is on the prowl to get a faceless body underneath him. It’s a temporary fix for the emptiness, the deep seated loneliness that has taken root in his heart and mind. Every time a different body. No repeats. No exceptions. When he catches a glimpse of a familiar face, a face he hasn’t seen in a long time yet is still etched vividly in his mind, he needs to know if it’s really Jackson. The man who broke his heart so thoroughly.
Jackson wants nothing more than apologize for the way he left him all those years ago but Lucas doesn’t give him the time of day until a tropical storm forces them together for a night. Lucas isn’t just holding a grudge, around the wall built around his heart there is also a barbed wire fence and he lashes out at Jackson. Things come to light, however, things that will change everything they thought happened eight years ago when Jackson left school just before graduation.

Even after all this time. I thought I’d gotten over it. Accepted it, moved past it. But seeing him again brought back every ounce of hurt and shame I’d felt back then, which pissed me off because it meant I was still broken. And it was all his fucking fault.

Jackson is everybody’s darling. He is friendly, kind and sweet, comes from old money and has stunning good looks and boyish charm.
Lucas’ character is the polar opposite, except in the looks department. He is the local sex god and man-ho and he makes good use of his reputation. Guys flock him and he can choose from an array of tourists that visit South Haven. Having Jackson back in his life means having to face and work through the past and that’s not what he wants. Lucas fights Jackson with tooth and nails and settles firmly in jerk territory.

“I lost my parents. I lost you. Then Gram passed. Putting up walls is the only way I know how to cope at this point.”

He doesn’t realize that he hurts himself the most when he lashes out at Jackson. He only knows that he can’t get hurt again like he did eight years ago. Him being a grade A asshole towards Jackson doesn’t make him sound very likable but despite it all I still did. Lucas’ loneliness and hurt is coming off the pages so vividly that you just can’t help and feel for him. And when he starts to open up you see the sweet, funny, mischievous guy from Jackson’s memory coming back.

Lucas groaned and pushed me away as I laughed. “Fucking tease,” he muttered.
“What was that?”
He plastered a fake smile on his face. “I said do you like any of these?”

If Jackson was anything less but as patient and understanding as he was, Lucas train wreck of a life would end like that – lonely and bitter. Jackson is a good man, the better man really, and the way Lucas treated him sometimes would have chased every other guy away but he can see right through Lucas’ facade. It couldn’t have been anyone else saving this abrasive, acrimonious man. Jackson was incredibly lovable and endearing and everything Lucas needed to let go of his fear.

A thousand words were said in those moments of silence, and most of them began with, “I’m sorry.” All of the anger and hurt and resentment washed away as we sat there making up for our offenses without saying a word.

This story had everything that ticks my boxes, angst, lighthearted humor, a gripping plot and fascinating characters. Anxiety tightened my chest not just once and when Lucas fired off his barbs my eyes stung with tears a couple times. He could be such an asshole.
The set of secondary characters is amazing and while I’m looking forward to both Shaw’s and Bash’s stories, the scales tipped slightly in Bash’s favor towards the end. He is such a scintillating, colorful character! Having said that though, I LOVED Shaw.

This is the first MM romance Brooke Blaine wrote alone and didn’t co-author. I am tremendously impressed how riveting, hot and intense this story was. Ms. Blaine wanted to give her readers her very best and let me tell you, it is one of the best MM books I’ve read this year. Whenever I wasn’t studying my eyes were glued to my Kindle. If you read MM do yourself a favor and pick this up. Now the waiting for Shaw’s story begins.

A Little Bit Like Love is the first installment of the South Haven series.
All teasers courtesy of the author

NEW RELEASE: PENELOPE WARD – THE DAY HE CAME BACK

5 STARS ✮ THE EDGE OF US ✮ VERONICA LARSEN